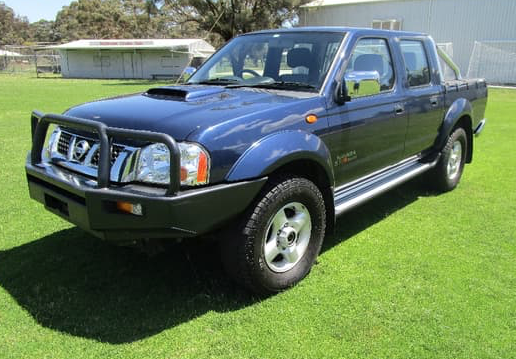 The younger brother to the D40 Navara is the D22 and two siblings could not be more unlike one another. Whilst the D40 is a vehicle very close to the top of the “do not buy” list the D22 has very few common faults.

The D22 is a much simpler set up with fewer features which means fewer things to go wrong.

Vehicle released in Europe with the 2.5 Diesel engine have reported problems with the big end bearings and the con rod bolts. However we have never seen this and suspect this fault may only apply to vehicles distributed elsewhere in the world.

Things to take note of if you do buy one. The factory fitted drive belts are known to develop a strange noise. This is not a conventional belt squeal and sounds more mechanical than it actually is. Often this noise is diagnosed as a faulty timing chain or timing chain tensioner. This is not the problem and a new set of drive belts from gates will rectify this issue.

The D22 is somewhat gutless. Its very slow off the mark and has a zero to sixty far too slow to bother measuring. This is not a problem if you know about it and can live with it. It does however cause some issues in manual vehicles especially if the ute is used for towing. The slow rate of acceleration causes some people to force the ute to work too hard and the clutch prematurely wears out.

The only other super common fault with the D22 is the EGR valve giving trouble. This is not specific to the D22 but rather to all diesel engines driven in start stop traffic. This can be reduced with the use of an EGR blanking plate however we do not advise this. This causes the vehicle to not comply legally with emissions laws.

Overall the D22 is probably the most mechanically sound ute currently in the used car market. If you can handle the fact that its not winning any awards for its rate of acceleration this is the perfect ute.

The advantages to this ute are mostly attributed to its simplicity. The lack of features allow for less faults. The interior allows for water and mud and other worksite grime to enter the cabin without the risk of causing damage to electoral components. The lack of a key fob means lost keys are not a huge problem. No timing belt keeps maintenance at a minimum and drum rear brakes allows most users to get up to 60,000Kms before brakes are needed.

We have covered the D40 (which is a complete lemon) in this article here.