Thank God for the Towies 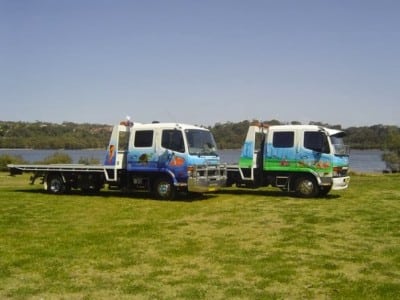 The greatest hurdle in the start up stage of our business came when my parents separated and as a result sold the house we were operating from. Naturally this was hard enough to deal with on a personal level and that was something I had to battle, but to add insult to injury we were now with an expanding business with small reserves of cash and no place to operate from.
A few nail biting weeks were spent looking at workshops and pricing whilst we rapidly came to the realisation that we could not afford any of this.
The call went out to friends of the church community to see if anyone was willing to rent out their garage. A few offers came in but nothing very suitable. One was on a very steep property which was not good for broken down vehicles and one was another carport which had no walls making it unpractical as well.
At the same time of all of this happening I was renting a bedroom with some family friends who had just been informed they had to move house. Now we were looking for a new house and a new workshop at the same time. The idea came to kill two birds with one stone and try and get a house that had a large garage and operate the business from the house we were renting. Naturally the business would be contributing more money in rent to cover this which was something we had set a budget for.
It was not meant to be. No such house that could hold the family I was renting with and have a large garage could be found within our combined budget within fifty kilometres of where we were already based.

Things were getting dire and options were running out. In a last ditch effort I rang Paulie (the bloke in the picture with a receding hair line), a mechanic turned tow truck driver whom I had worked with in the past and was now my regular towie for my clients whose vehicles had broken down. I asked Paul if he knew of any workshops that would be willing to sub lease a hoist or even just an area of a warehouse to us. He told me he would call me back (he always does that) and later he did call me back. He had found us a workshop, it turns out it was his boss who had some space to share and was willing to sublease the space to us (he did not even know us).
The generosity of Mark Seymour and Narrabeen Towing single handedly saved our business. More than fair rent was arranged and we moved into an unused small workshop at the back of the towing yard.

It’s fair to say the towing world is like nothing I had ever experienced before or could even imagine. Drivers don’t sign up for a job, they sign up for a culture and a lifestyle. It had a few bumps along the way but for the most part operating down there was great for a laugh and has given me some of my greatest business memories that I will cherish for life. We made great friends with the towing boys and years down the track when we had to move from there we still do business with them.
People are quick to write off towies as heartless meat-axe type of blokes and in some cases this is true but they sure saved us back then and we think very highly of them.